So, work is underway on the new development – which will be called Drover’s Mead incidentally. 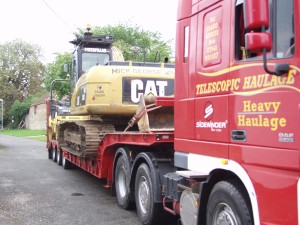 According to a site foreman, heavy plant equipment will be used to level the land and create an access road for the construction traffic. This will include groundwork for drainage and sewerage for the 24 four and five bedroom homes to be built on the site.

Impact on the local area leading to the site is supposed to be kept to a minimum. However, there has already been damage to unprotected grass verges by 40-foot low loaders reversing up the lane to drop off heavy plant. Manoeuvring long vehicles round a tight, blind junction and then snaking it around a twisting 500 yard course can’t be easy. Some damage will be inevitable it seems – despite protestations to the contrary from the developers.

The cab of one vehicle struck an ancient hawthorn on the lane and knocked off one of its overhanging branches.

Once earth moving starts as the builders begin to remove the surplus top soil – some 500 tonnes – there will be 50-60 vehicle movements a day of heavy tipper lorries up and down the quiet lane and through the village. This is set to continue for at least three days.

The lane itself has no foundation. Tarmac has been laid over what was previously a dirt track. It’s difficult to see how damage to this can be avoided. Then there are the sustainability issues of the amount of CO2 being generated by the vehicles to’ing and fro’ing.

The village itself doesn’t, I think, need new development. The local economy probably won’t benefit greatly from the increased population. Residents will not be around during the day. Shopping and leisure activities will take place outside the village and there will be increased pressure on the environment, and on amenities such as the village school, which is currently over capacity.

The only groups to profit from this will be the Homes and Communities Agency from the sale of the land, the construction sub-contractors and the developer from marketing the new homes.